a new yet previously mentioned song: one idealistic morning. if there's one thing i appreciate it's a song that when i'm mixing it down only crashes my computer 30-40,000 times. 50,000 is when i start to consider giving up.

i kind of hate the summer. only because i hate sweating. it fucks up my body glitter. i do like that it's light out later though. so when i wake up at 6 pm i have at least two hours of daylight before i rejoin the eternal blackness that is my life.

i also kind of like the summer movie season. i've realized recently that more and more hollywood trailers work on me. when i just hear or read about these big budget films i think they sound terrible, but 1 minute and 30 seconds of clips put to a song from the 90s that i didn't like when it came out but maybe that's because there was no cgi involved then? i suddenly can't wait to see bruce willis/christian bale/hugh jackman fighting/being/crying in front of fake robots.

and i know what you're thinking, fictional best friend that is starting to seem out of touch because you still read livejournal, 'pete, trailers work on a lot of people. that's why they're so popular now.' i know, but i find it weird because they work on me, and while on the outside i'm a calm 30 year old content to sit around and listen to my facial hair grow, underneath i'm still an anti-establishment 12 year old punk. beneath my skull, my brain has a tiny mohawk.

but i've seen/want to see every movie that comes out (to the confusion of my girlfriend). and i pretty much enjoy all of them even though they are almost all really stupid. this might be mostly because they are being marketed to me, or that i've given up on life, but it could also be because i finally learned how to watch them.

after 26 years of reading comics, 95% of which are a guy punching fake robots and still liking them, i started subconsciously using the same uncritical part of my brain to watch movies and tv. i didn't watch much tv in my teens/early 20s. not because i was too cool, just because i couldn't afford one. when i started watching it again, i couldn't believe how bad every single television show in the world was. they're all really fake and forced and hamfisted. a few months later and my life is what seemed fake and forced, 'andromeda' or 'seinfeld' or whatever seemed more real than my own hands.

i was still critical though. i think the real change happened with 'lost'. i like 'lost' a lot, though i don't like admitting it. sometimes it is very, very bad and soap opera-y and corny, yet i found myself while watching it thinking 'whatever, it's free, it's not like i made it, who cares if it gets bad, i am not to blame.' so there's this weird uncritical viewing going on. like returning to the womb, where i just enjoyed any vodka my mom drank no matter how cheap the brand because it was free.

not that i'm fully complacent (yet). if i ever start watching heroes, i'll kill myself.

gif week.
hey.
here's an old song but new to livejournal the temple's all right.
i was going to post a song that i had been working on since 4 o clock until 10 minutes ago but it has become an overcomplicated disaster much like the terminator timeline or my sleeping schedule.

among the 70,000 emails i got today alerting me that my facebook was hacked there was an email asking me why i didn't post a link on lj to the conclusion of my comic on the arthur blog. after sitting unmoving and thinking about it for the past 12 hours, i've realized the answer is 'uh, i dunno.' 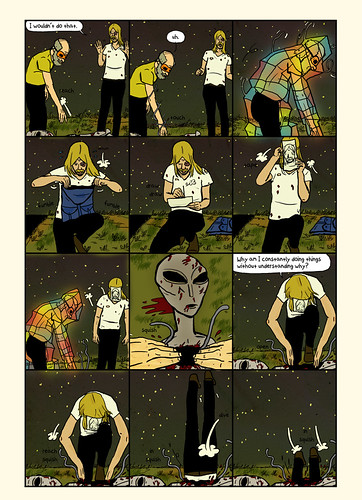 i'll probably have more to say about the thing eventually but for now both jason leivian and arthur mag were awesome for putting it up, and it was super fun to do.

while i'm linking things i also got a new cafe press page. here. i'm going to try to keep this one updated more often than the previous one i had that i looked at once every 3 years or so. 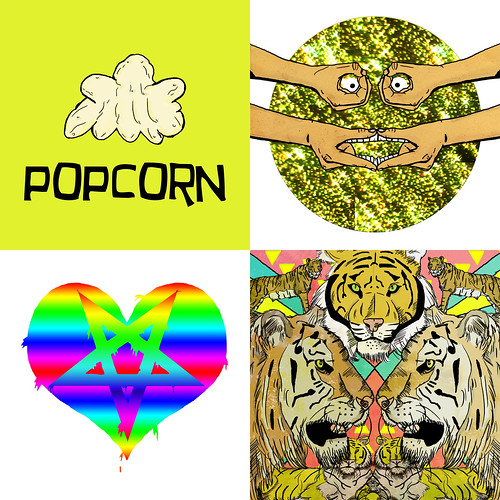 the best part about my facebook being hacked and sending spam to my friends list, was that i was then in turned spammed by people asking me why i'm sending them spam. it was almost exactly like the plot to the count of monte cristo. well played, internet, you have had your revenge.

the second part (6 more pages) of my comic are up on arthur.

in an attempt to meet a few sudden deadlines as well as train myself for my future as a completely insane person, i was awake from sunday morning until last night-ish. it was actually kind of fun, if you ignore the moaning, the invisible bugs on me or the fact that the cain robot from robocop 2 was disguised as my mailman and eating my credit card bills. for the past 24 hours i've been in a sort of half asleep state where i can't hold a thought or conversation and the only way i can tell if i'm awake or dreaming is in my dreams it's harder for me to twitter because my huge bulking biceps get in the way of typing.


i've been sort of linking to it everywhere and saved lj for last as it is either the most important or the only place where i feel i can post when i've absolutely run out of things to say (or both). there's a slightly more detailed explanation of the comic on my blog. though i realize by clicking that link you would then be trapped in the internet maze i have built for myself, and believe me you don't want to be here. especially since the minotaur won't stop talking about the differences between the watchmen comic and movie.

maybe i should quote myself:
i'm really happy to be able to do something for arthur magazine as i actually read the mag and the website and really dig it. jason leivian is their online comics dude (as well as being involved in 600 other projects on a daily basis). and he's been posting really awesome shit there recently like farel dalrymple's pop gun war sequel and stuff by kevin hooyman and al columbia. and stanley lieber is working on a story for it that may finally reveal the sexuality of the internet.
- pete toms (after shaquille o'neal, 2009)

the poster is for a kitty pryde-themed show at jason's store in may.

i haven't been up to too much else besides drawing, feeling weird abstract guilt about being vaguely against violent war video games while playing every fps i can get for playstation 3, crying about money in beat with everyone else and talking about the terminator tv show probably more than the people that actually work on the show.

after years of evolution (that most of us don't believe in), the creation of tools both psychological and physical, the formation of societies, the growth of human culture, the invention of the moonwalk, the internet and copyright law, infinite tears, and a small amount of song writing; we step out of the cave and are greeted by 13 mp3s that i'm referring to as my 'new album'. a personal psychic victory as well as a victory for all (between 1 and 50%) of mankind.

not really. i finished this a while ago and i have a tendency to despise my past self, if i can actually remember beyond 15 minutes ago, but here's some notes on the songs as i'm re- listening to this. any amount of small enjoyment that might come from hearing the music yourself is, of course, mostly negated by reading the below spoilers.

come on tanelorn. from godownmatthew on Vimeo.

this is sort of a promotional video for my new album that i'll be putting up here soon. actually i guess it's more of a promotional video for me. it'll be running on 3 of the major networks concurrently the night before i post the mp3s. what works for obama can only work for us all.
i apologize for whatever it is my hair started doing the day i shot this. it's been rebelling against either winter hats or the fact that the 90210 hairstyle it loved so much has become sort of passe.

the song playing in the video is dragonless. which i guess would be sort of the 1st single. and here's the fake title track the real wild hearts 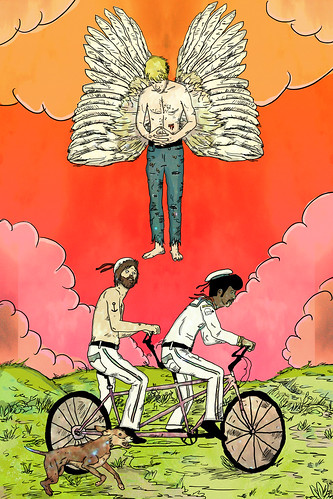 kind of an old link now, but if you watch that video and for some reason need more me

yanatonage interviewed me on his blog. a blog well worth reading even (especially) if you skip that post. 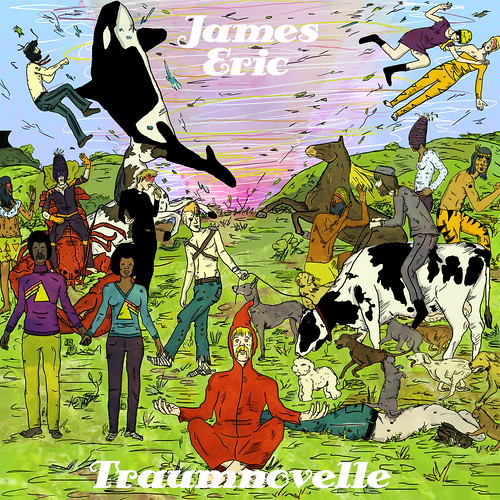 cover i did for james eric's traumnovelle that i don't think i posted here.

posting on lj during the day is weird.
besides constantly refreshing my twitter feed every 4 seconds on every one of the 200 twitter apps i have on my computer, i've been playing super mario 3 on the wii. mario 3 might be the only one i never played as i think when it came out i was already at seminary training in the ways of the religious techno assassin or it was during the 6 years my parents pretended they didn't speak english. so this is totally old news, but it is the most frustrating thing i have ever been involved with. at it's core it's like every other mario game but with so much more of you screaming in your head. the dudes that made it obviously hated children and nintendo and mario and life. i still can't stop playing it though. yesterday after i died after getting to the 3rd world's castle i actually felt every blood vessel in my eye and the eyes of my unborn and unconceived children explode.

to everybody but mostly to the two dudes that told me they miss my lj entries yet apparently refuse to just look at my blog. 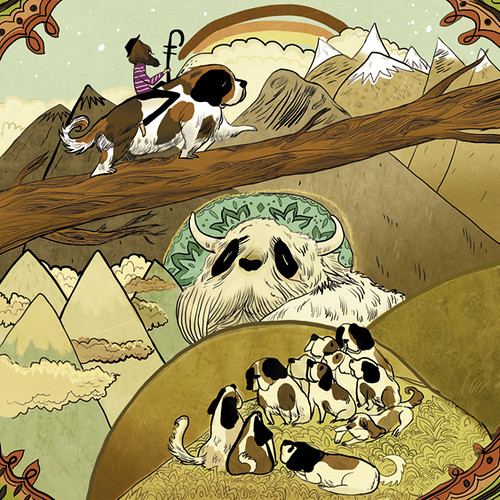 ultrakurtzwelle's cover art for the last go down, matthew album is apparently being sold as a limited edition print by tinyshowcase. you should buy one as it benefits the new jersey audubon society, who, i hope will eventually capture and return me to my natural habitat.

i'm going make an actual post on here soon. as soon as i get over my anger that no one on my friends page posts spoiler warnings. seriously. some of us were waiting for the dvd release of the presidential election.